• Current weather in Blanes
• Blanes Weather month-by-month
• Does it ever rain in Blanes?
• The best time to visit Blanes
• Winter in Blanes

VisitBlanes.com — When the Romans founded the Costa Brava city later known as Blanes they named it Blanda (mild) — a reference to the local climate.

The Costa Brava has a typical Mediterranean climate with hot summers and mild winters.

Located at the Southern-most part of the Costa Brava, Blanes is blessed with summer months that are not oppressively hot and a winter season that is not bone-chillingly cold.

Regardless of what you may have heard about the rain in Spain it doesn’t mainly fall in the plains. 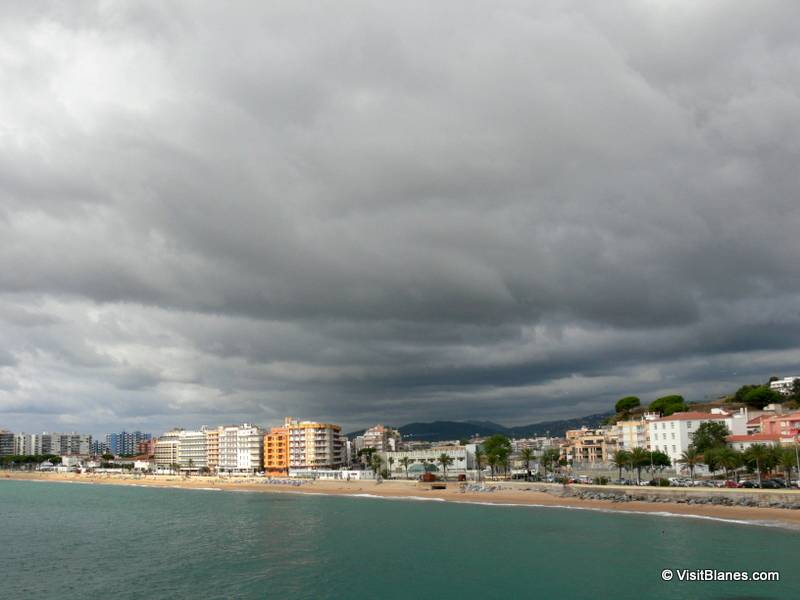 You can expect rain in Blanes throughout the year, though certainly not every day.

The good is news is that, more often than not, it usually rains during the middle of the night.

Even when it rains during the day most of it is in the form of relatively brief showers.

However, every once in a while there will be downpour that blanks the streets in no-time.

Generally the best time to visit Blanes is in the months of June through September.

Mind you, July and August are both the hottest and the busiest months.

Locals and experienced frequent visitors say that September — certainly the first half of the month — is the very best time to visit the resort. The crowds are gone, the weather is still great, and everything is more relaxed.

The second half of June is good as well. There’s plenty of space at the beaches, though on weekends it can get very busy indeed.

Whether or not you’ll encounter one or more subsequent days of rain is pretty much the luck of the draw — especially in June or September.

While some websites aimed at tourists suggest the citizens of Blanes enjoy outdoor dining all year round, that is usually not the case. The winter months do have cold spells.

Don’t believe us? Here’s video of snow in Blanes:

Note, too, that while there is plenty of sunshine even during the months of November through April that normally doesn’t make for fine beach weather even for the most dedicated sun-worshippers.

Thank you for using our Visit Blanes tourist guide. We trust you will have wonderful holidays! Very Popular: Lloret de Mar: Catamaran Sailing Experience with BBQ Lunch See the Costa Brava from the water and swim in the Mediterranean sea! [bdotcom_bm bannerid="926"]
This post was last updated: Feb. 17, 2018