Blanes has more than four kilometers of coastline, offering a variety of beaches including S’Abanell — the longest beach of the Costa Brava.

The beaches are well maintained. Fresh sand is brought in when needed, and at night cleaners remove trash and leave a freshly raked beach.

The sand on most of Blanes’ beaches is somewhat coarse, but pleasant for lying and walking.

It’s not so good for building sandcastles, though – but judging by all the happy kids, that does not seem to be a problem at all.

Most beaches have small kiosks where you can buy refreshments at reasonable prices.

There are open showers at regular intervals. There are also some toilets and first aid facilities, as well as access points for the disabled – though not as many as you might expect.

Barcelona has its own beaches. So do towns and villages up and down the Costa Brava.

Still, many Barcelonians — and other Catalonians — vacation in Blanes.

Why? Many reasons, including: beautiful beaches with plenty of space, clean water, fantastic restaurants, gorgeous nature, plenty of nightlife, great shops, and an authentic old town.

Deep Water and Safety at the Beaches of Blanes

The beaches of Blanes have an excellent safety record.

Lifeguard stations along the beaches are manned from July 1 to September 12.

Motorboats, yachts, jet skis and sailboats must remain outside the clearly marked boundaries.

There are also clearly marked lanes for ferries and water sports craft, such as speedboats used for paragliding.

Most of the time, the surf is very gentle – and often almost non-existent.

Unlike many beaches in Western Europe, the tide is also barely noticeable.

However, families with small children and people who cannot swim should be aware that most beaches slope steeply just steps into the water. In other words, in most places the water gets deep only a few meters from the beach.

There is a child-friendly beach at the southern end of Platja de Blanes. This beach — in front of “the rock” — is popular with families who have small children, as the water there is quite shallow.

Look for the area south of the flags (across from the bus station at the roundabout of Placa de Catalunya) and up to the statue at Sa Palomera. The beach is right across from Restaurant Sa Malica and cocktail bar Can Tirol.

Note that a number of fishing sloops line this beach. Some of them are still actively used by elderly fishermen. They and their boats are much-photographed — a source of countless ‘picturesque Blanes’ photos on Instagram and other social media.

The fishermen use a motor-powered cable to pull their boats out of the water and onto the sand. It is operated in a safe manner, and this part of the beach remains one of the most popular spots along the coast.

Another Child-friendly beach in Blanes

Another beach very well suited to people with small children is the newly created extension of Platja de Blanes. It is right next to the yacht harbor and the port of Blanes.

This beach, which also has a gentle slope into the water, was formed during the remodeling and expansion of the harbor.

Nudity at the Beaches of Blanes, Costa Brava

As is the case along the Spanish coast, going topless is no problem at any of the beaches of Blanes.

In fact, Spain does not have laws that prohibit public nudity — though you’re still expected to use common sense as to where and when you decide to take advantage of this. 1

You will see the occasional nude sunbather or skinny dipper. But if you wish to go nude just be sensible, which includes being sensitive to those around you. [Read: don’t flaunt, and don’t do anything those around you would likely want you to confine to your own bedroom].

We’ve got a little more information in this PDF file. Though it contains no titillating text or photos, it is password-protected simply because such information tends to attract people to this website who are not interested in Blanes. The password to open the file is VisitBlanes

In short: Blanes presents itself as a family-friendly beach resort, and the vast majority of people behave accordingly.

Overall, the main draw of Blanes is the town’s excellent beaches, in the setting of a friendly beach resort with plenty of other things to do.

If it’s a beach vacation you’re after, waste no time and book your place in the sun.

Read more about the beaches of Blanes: 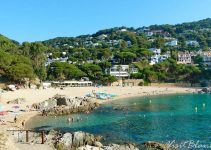 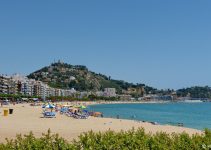