S’Abanell is the longest beach of Blanes: 2.1 kilometers of clean, golden sand.

To the north this beach begins at Sa Palomera — the rocky promontory that marks the official beginning of the Costa Brava, and serves as somewhat of a separation mark between the ‘tourist district’ and the old town. 1

It runs south all the way to the mouth of the (mostly dry) Tordera river. In doing so it stretches alongside the districts of El Pins and S’Abanelle, wheere most of the town’s 40 or so hotels are located. Furthest south it lines some of Blanes’ campings. 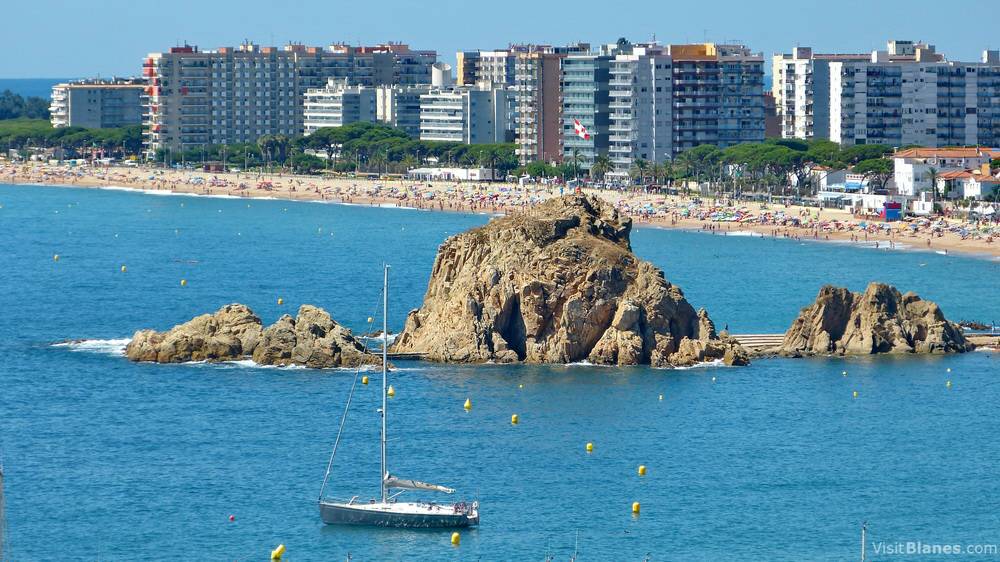 S’Abanell beach in Blanes, with the in foreground Sa Palomera, the rock that marks the official start of the Costa Brava

The sand — much of it reclaimed from the sea each spring — is somewhat coarse, and yet comfortable to walk and lie on.

It is not well-suited for the building of sand castles, but it is golden and clean.

Speaking of which, the entire beach is cleaned every night.

Battle Against The Sea

Guide books and website say that S’Abanell beach varies in width between 40 and 60 meters, but in recent years it has become somewhat narrower.

This entire beach is subject to much erosion during the winter months, when wind-whipped waves drag much sand out to sea.

Many storms have even caused damage to the boulevard itself. In 2009 — after the particularly destructive storm of December, 2008 — large sections of the boulevard were reconstructed and fortified in a semi-permanent fashion.

An ambitious redevelopment plan for the entire tourist district and its beachfront was approved by the City Council of Blanes. However, that plan — which includes measures to fortify the beach — was put on the back burner due to the financial crisis. It is not clear if and when it actually come about

At any rate, whenever the beach is damaged, repairs are made well ahead of the tourist season. And even during the high season there is plenty of space for everyone. 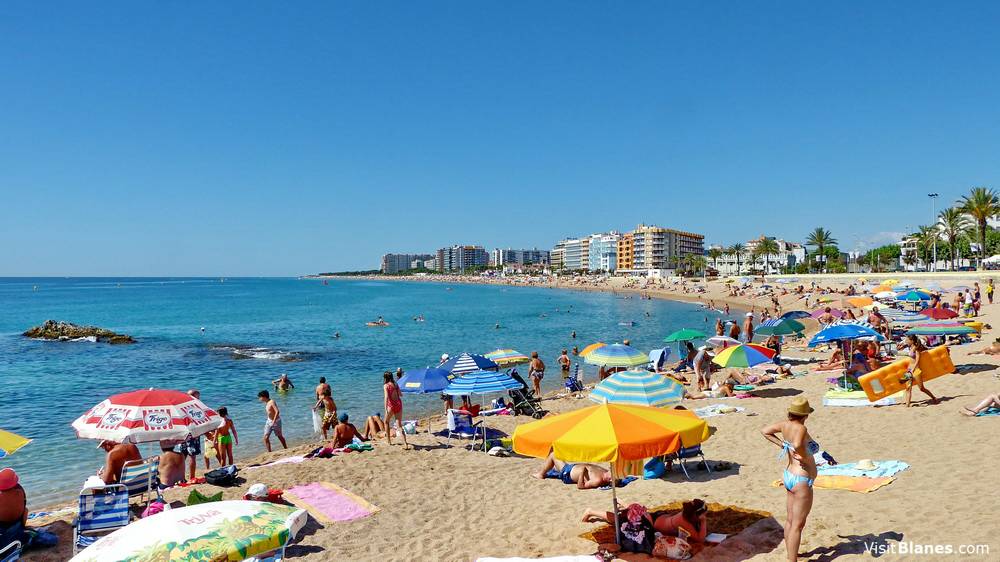 S’Abanell beach stretches from Sa Palomera to the mouth of the river Tordera, along Blanes’ hotel district

End Of The Boulevard

Officially this beach ends at the mouth of the Tordera river. However the promenade ends a bit sooner — near the last camping along the beach. ears ago you were able to continue on a small, unofficial path, but since the December, 2008 storm access to the path has been closed.

At this point the beach is quite a bit smaller, and huge boulders — placed there to protect the beach and the boulevard from further erosion — prevent you from easily walking to the last stretch of the beach.

You can still reach this part, either by clambering across the boulders, or by walking down Avinguda De La Vila De Madrid. 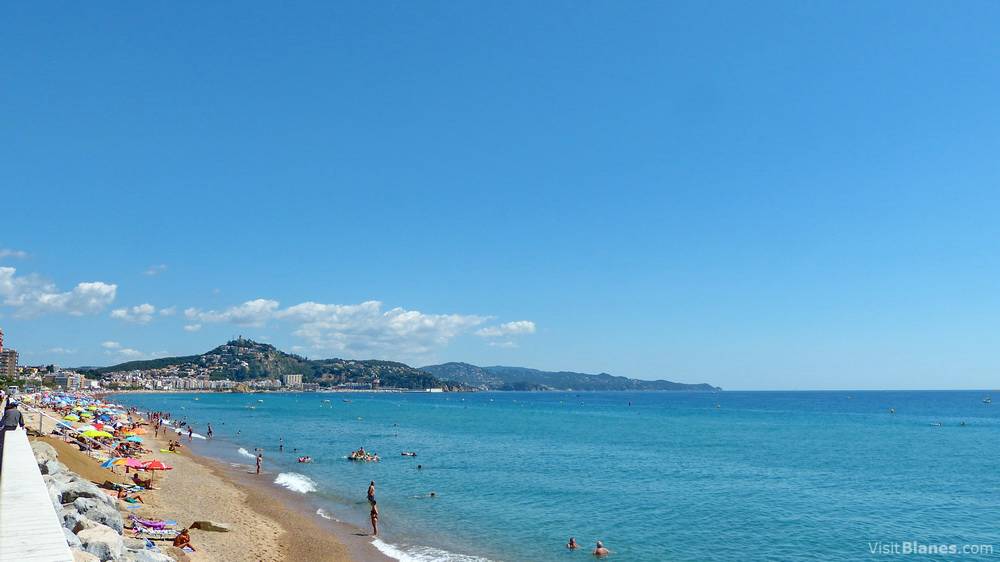 Today the very end of the boulevard (2.5 km from ‘the rock’) the beach becomes a lot smaller.

At the mouth of the river Tordera — which is dry for most of the year — is a designated, official nude beach. It is seldom busy, and is frequented primarily by older men and some middle-aged couples.

Note that nudity can be encountered at any beach in Spain, though at S’Abanell people seldom go beyond topless.

Close to the Avinguda del Mediterrani street [Google Map] there are facilities for the disabled — including wheelchair-accessible toilets and access to the beach.

There is also a lifeguard station at this location. 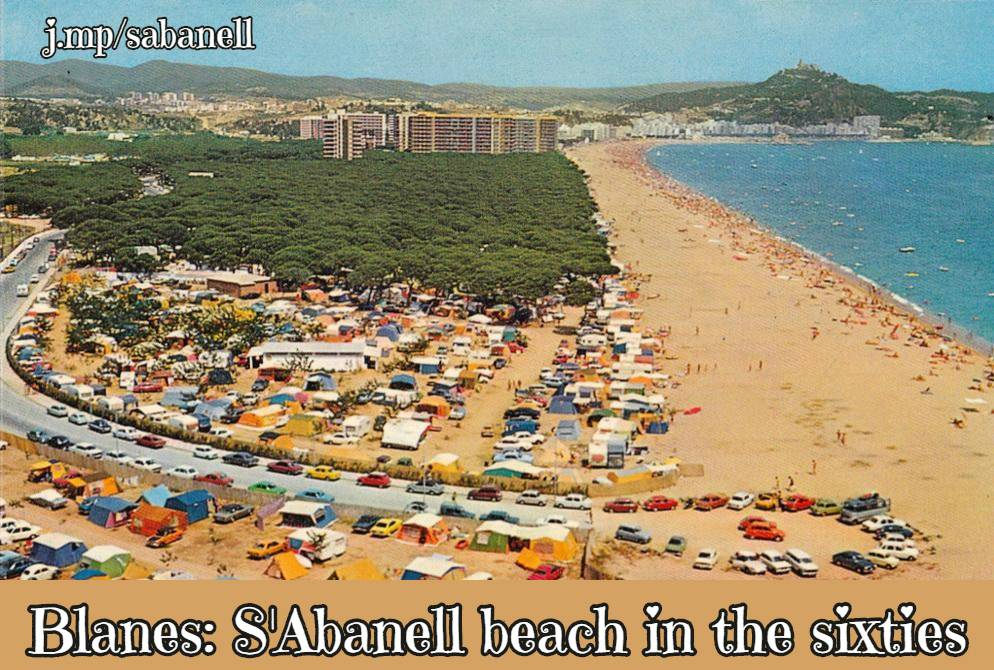 S’Abanell beach, Blanes, in the Sixties

There are kiosks, snackbars and some restaurants on or near the boulevard along the beach.

Do not expect too much from the restaurants, but we’ll note the following:

The Texas Ranch Steak house, across the road, has turned into a huge success under the guidance of Alex — a guy from Scotland.

If you’re up for steak, ribs or burgers — or, of course, Texas style Mexican food — this is among the best places in Blanes to eat.

The prices are alright, the staff is friendly, efficient and helpful, and the food is good. No wondeer many people return several times during their stay.

Punta de Santa Ana beach (next to the harbor)