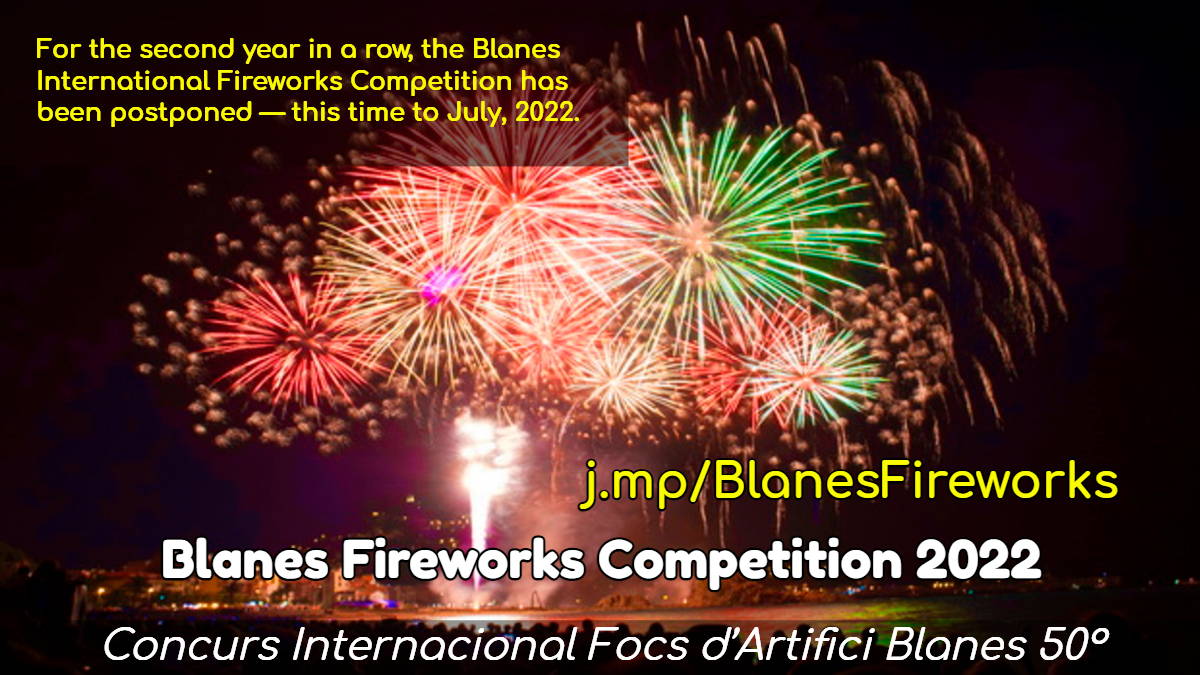 For the second year in a row, the Blanes International Fireworks competition has been postponed due to the COVID-19 pandemic. The competition is now scheduled for July, 2022.

Due to the coronavirus (COVID-19) pandemic, the 2020 edition of the popular Blanes International Fireworks Competition did not take place. It was postponed to July, 2021.

However, the coronavirus pandemic is still not under control. Therefore the Blanes City Council has decided on March 30, 2021, to postpone this year’s edition as well.

That means the 50th anniversary edition of the Blanes Concurs Internacional de Focs d’Artifici is now scheduled for July, 2022.

In recent years the event has drawn nearly one million visitors.

The 2020 event would have marked the event’s 50th anniversary. It was meant to last 6 days — one day longer than usual. The pyrotechnics companies had already been selected to take part in the competition: four from Spain, and two from abroad.

In honor of the anniversary various events had even been planned from March through the end of the year.

However, though the coronavirus lockdown in Spain was briefly lifted, ongoing security measures such as social distancing and a ban on large-scale events remained in force. That made it impossible to let both the Festa Major and the fireworks competition take place.

The fireworks competition draws tens of thousands of visitors a year. The shoulder-to-shoulder crowds gather on the beaches and boulevards to see the fireworks.

Information below this line includes details and dates of previous Blanes fireworks events. This article will be updated with information regarding the 2022 competition as soon as they become available.

This is a hugely popular event, during the height of the high tourist season. This makes it essential that you book your hotel, B&B, or guest home as soon as possible.

The Festa Major always culminates on July 28 with the Aplec de l’Amor (Feast of Love), at the secluded beach of Sant Francesc, known as Cala Bona. 1

[As with many details, the competitors for the 2021 event are not yet known.]

Rules and guidelines for this year’s competition have been be made available to national and foreign pyrotechnics companies. Each of the five companies selected will receive €19.000 in order to prepare their shows.

Winner of the 2018 Fireworks Competion

For the third year in a row, the competition was won by Fuegos Articificales Hermanos Ferrández, Murcia, Spain. The company also won the 2011 contest.

Here is their price-winning show:

Further down you will details about the festival’s history, its current format, and the rules of the contest.

For the second year in a row the Blanes Fireworks Competition has been won by Pirotecnia Hermanos Ferrández, from Murcia

Their display lit up the skies on Monday night, to the delight of the crowd:

On Saturday night Pirotècnia Vulcano started off this year’s competition — and they set the bar high:

The 47th edition of the International Costa Brava Fireworks Contest will take place from Saturday, July 22 through Wednesday, July 26, 2017.

This feast in honor of Blanes’ patron saint lasts 8 days and always always takes place in the last full week of July. 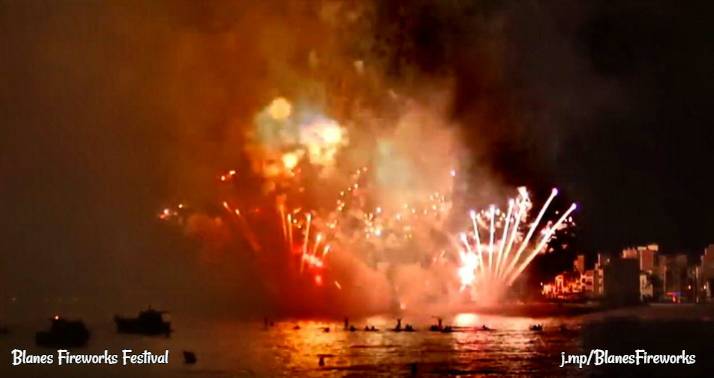 Fireworks show on Sa Palomera, the rocky promontory in Blanes that marks the beginning of the Costa Brava

This year 16 pyrotechnics companies applied to take part in the prestigious competition — 12 from Spain and 4 from abroad.

As always, the winner of last year’s competition — in this case Pirotecnia Hermanos Ferrández — is guaranteed a place in the current year’s festival.

What you can expect

Let’s be brutally honest. There have been plenty of fireworks presentations at the Blanes festival that were, to put it kindly, not all that special.

But then there are also plenty of shows that make it totally worth it to be there in person.

Take a look at the spectacular winning entry from last year’s competition, by the pyrotechnics firm of the Brothers Ferrández:

In 2016 the fireworks competition returned to its original run of 5 days.

From 2012 through 2015 the festival lasted just four days — as a result of Spain’s financial crisis and its aftermath.

Dropping a day saved Blanes a lot of money normally spent on crowd control, safety measures and other police duties.

Last year the event attracted enough sponsors to enable the city to bring back the fifth night.

Saturday night — traditionally the busiest day of the event — saw a record crowd of 250.000 spectators.

If you’d like to spend the entire week in Blanes, make sure you book your hotel early.

The fireworks show starts at 22:30 (10:30 pm), and prime watching spots start filling up about an hour before the spectacle.

If you attend the festival from outside Blanes, do not come by car unless you’re prepared to park far away.

The fireworks show centers around Sa Palomera, the rocky promontory (‘the rock’ to most tourists) that separates the old town center of Blanes from the newer part (El Pins, where most of the town’s hotels and camp grounds are located).

Just about anywhere you plan to watch will be crowded — super crowded. And yes, plenty of people have the same ideas you’ve got: to watch from spots on the hill of St. Juan, for instance.

Keep an eye out for posters or fliers announcing such opportunities, often written only in Catalan and/or Spanish.

Other great spots: along S’Abanell beach. The closer you get to the camp grounds, the lighter the crowd.

Of course, if you prefer to be shoulder to shoulder, head on over to Platja de Blanes. That’s thee beach along the boulevard in the old part of town. It tends to fill up quickly. 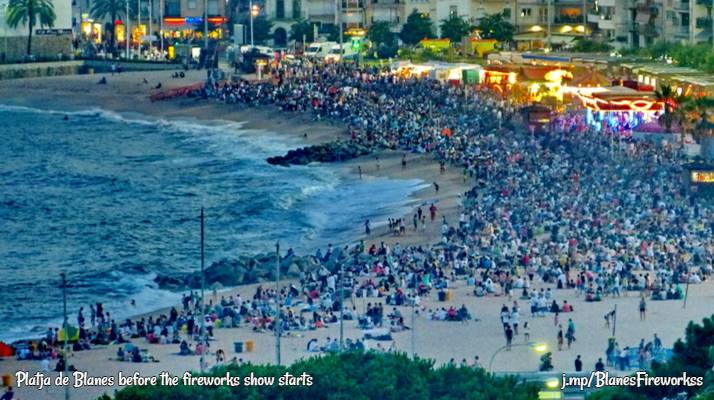 A crowd gathers on Platja de Blanes, about an hour before the start of the fireworks show. There’s a fair on the boulevard. And note that the surf this day was a bit wilder than usual.

The raised ‘jetty’ walkway north of Platja de Blanes (between the yachting harbor and the beach) is great place that provides you with a direct view of the show.

The companies have to agree to a detailed set of requirements, including details covering the type of fireworks to be used, the length of the show, and safety measures to be observed. 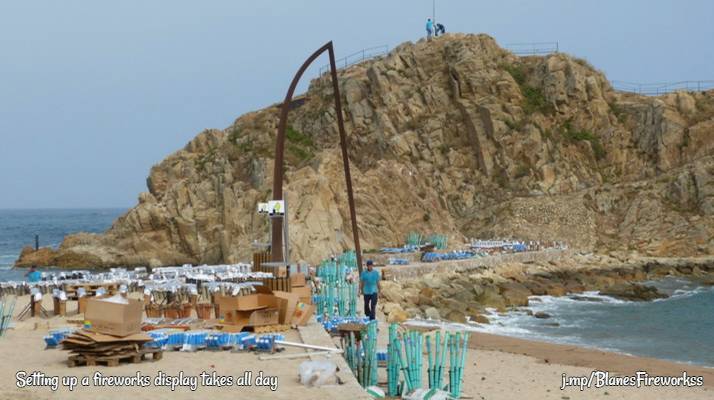 Setting up the fireworks is an all-day project. The rock, Sa Palomera in Blanes, marks the start of the Costa Brava

The conditions call for the displays to be both aerial and aquatic. That means each show must include rockets and other fireworks shooting upwards and outwards, as well as fireworks that make use of the water surrounding the rock.

The idea is that the show must highlight the natural setting of Sa Palomera.

Oh, and participating companies must certify that any and all products used in their displays are completely biodegradable.

The company that opens the series of shows must prepare an illuminated, 8 meter wide and 1.5 meter high sign with the inscription: “Glòria a Santa Anna.”

Each company must also display a similar sign that reads “Blanes 2017.”

Participating companies agree to make sure their shows last a minimum of 20 minutes and a maximum of 24 minutes, and that the fireworks are launched uninterruptedly with absolute continuity between the luminous effect of one launch and the one immediately following. (Yes, this makes for a truly awesome sight).

If a company fails to appear on the day of the contest, the City can impose a maximum fine of € 40,000. There are also various penalties for displays that are too short, or displays that start as little as a fraction of 1 minute too late.

The shows are judged by both a technical- and a popular jury.

The technical jury looks at such things as the type and variety of products used, the quality of the launches, and whether all of the firework products match the specifications set out in the contract.

The popular jury — which consist of up to 40 residents of Blanes — evaluates the offerings on color, rhythm, difficulty, originality, water fireworks, the effective use of the setting and the general artistic effect of the display.

In case of a tie, the opinion of the technical committee prevails.

The oldest reference to fireworks shows in Blanes dates back to 1891, but it is not clear when it became a yearly tradition.

What is known is that the event stopped when the Civil War broke out in 1936. It started up again in 1944, and in in 1970 the event became a yearly competition that was meant as a way to promote tourism in Blanes.

At first the competition lasted three days. In the mid eighties it was expanded to four days, and from 1996 it lasted five days.

As a cost-saving measure brought on by Spain’s financial crisis, from 2012 through 2015 the event covered only four days.

The year 2016 marked a return to the full, five-day festival.

The official website for El Focs de Blanes is in Catalan and Spanish only. 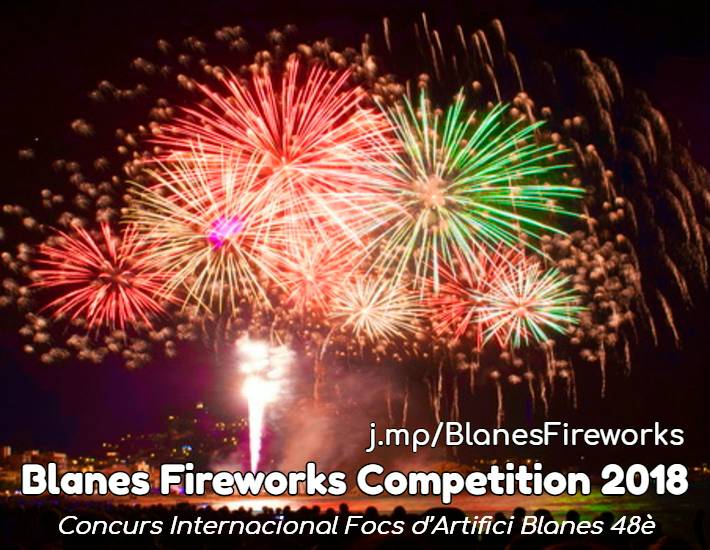 The fireworks photo featured on our front page was taken by Gerard Romans Camp, who has graciously made it available under the Creative Commons (CC BY 2.0) license. View his other fireworks photos.