Blanes — the first city on the Costa Brava — is popular with Catalans and foreign tourists alike. Here’s why.

Blanes has something to offer that few coastal towns in Catalonia — indeed, in all of Spain — have: old-world charm alongside modern tourist amenities.

Unlike Lloret de Mar — its tourist-overrun neighbor to the north, Blanes has managed to hold on to much of its original Catalan identity.

As in many other towns along the Spanish coast, Lloret de Mar’s old town center right on the beach has been transformed into a tourist trap with gaudy souvenir stores, hamburger chains, discos and gambling halls. Many of the town’s residents have moved away from the hustle and bustle (not to mention the abundance of louts attracted by the cheap entertainment) of today’s tourist district.

Although Blanes has also been influenced by tourism, much of the old town center still has the look and feel of an old Catalan coastal village. Here, young and old locals mingle with tourists and day-trippers — buying fresh fruit and vegetables at the daily farmers’ market, enjoying tapas and beer at ‘been-here-forever’ Café Terrassans, and strolling along the seafront on their way to a late dinner.

It’s true that most of the shipwrights’ and fishermen’s houses that once lined the beach have given way to five- and six-story apartment buildings. But a block inland, there are picturesque streets that recall the days when Blanes was known for its shipbuilding industry.

Blanes still has an active fishing fleet, along with the only fish auction in the region. This thriving industry employs many of the locals who live in the old town center.

You can watch the fishing vessels come and go all day long. When you visit the fish auction, you might just see the very fish or other seafood you’ll enjoy at a local restaurant or tapas bar later that day.

In the city center there is also an extensive shopping center, which extends over a maze of small streets and cozy squares, where you can find all kinds of pubs, restaurants and bakeries.

Notably absent are the noisy souvenir stores and chain restaurants that have turned Lloret into a Las Vegas-style nightmare. Instead, most stores cater primarily to the needs of locals.

There is an excellent selection of elegant shoe stores and upscale fashion boutiques, as well as swimwear and lingerie stores.

At the same time, there are a variety of stores to suit every budget.

Blanes is a popular destination for weekend visitors from Barcelona, the capital of Catalonia. Many Barcelonians have their weekend and summer homes here.

The seaside resort is only about an hour-and-half by car or by train from Barcelona.

No matter where you are in downtown Blanes, you are always just a few blocks from the crescent-shaped beach. Popular with locals – and with the relatively few tourists who have the good sense to rent an apartment rather than stay in a hotel – the beach is lined by a wide boulevard with a wide selection of restaurants and eateries. At its southern end is La Palomera, a rocky promontory jutting into the blue waters of the bay – and the reason Blanes is known as the “Gateway to the Costa Brava.”

South of La Palomera the coast is mostly flat, smooth and unadventurous. Near Blanes, the coast becomes much more interesting. To the north, just past the port, you can see the rock formations that gave the Wild Coast (Costa Brava) its name. If you take one of the ferries along the coast, you will see an ever-changing landscape of steep cliffs and jagged rock formations interspersed with caves and small coves with hidden beaches.

Standing on La Palomera, after climbing the steps carved into the rock, you are rewarded with a sweeping view of Blanes — from its harbor at the foot of the hills to the north to the pine-covered campsites at the southern end of the bay.

During the day the sheltered beach at the foot of La Palomera is a popular spot for sunbathers, who find their place among the fishing sloops. Looking inland, you’ll see straight ahead D’Auger — a neighborhood at the foot of ancient ruins from the time when the Romans lived here.

The Tourist District in Blanes: Longest Beach at the Costa Brava

North of La Palomera is the neighborhood of Els Pins – a reference to the many pine trees. Els Pins is often referred to as the tourist district of Blanes, but it is home to both locals and tourists. While there are few high-rises in the old town center, north of the “rock” Els Pins has a distinct resort look — albeit on a much smaller, friendlier scale than elsewhere.

The golden sandy beach is wide and offers plenty of space for sunbathers. Its northern end, closest to La Palomera, is only really busy on weekends. That is when the local population and tourists are joined by weekend visitors from Barcelona, Girona and other parts of Catalonia.

The further south you go along the beach, the fewer locals and the more tourists you encounter. In the summer months you hear more Dutch than any other language — especially in the popular camping areas. Blanes is also popular with tourists from Germany, France and England.

Swimming and Sunbathing: Blanes at its best

If it’s a beach vacation you’re after, Blanes is an excellent choice. There’s a beach for everyone: from “hidden” coves like Cala Bona to the lengthy stretch of S’Abanell.

If you keep walking, towards the mouth of the – mostly dry – river Tordera, you’ll come across the official nude beach of Blanes. Note that you can be nude on the other beaches as well — as long as you don’t cause a nuisance. If you insist on baring it all, it’s probably best to be considerate of others and find a quiet spot.

That said, some locals do skinny-dip during morning swims. If full or partial nudity is a problem for you, a beach vacation in Blanes is probably not for you. Topless swimming and sunbathing is very much accepted here, and you’ll be able to see many natural wonders of all shapes and sizes when visiting the beach. No one is prudish about it, no one is harassed for it, and everyone is accepted.

Blanes has everything a tourist could want for a fantastic vacation — from the relative peace and quiet at the beach to the hustle and bustle of the hotel part of Els Pins. There, hotel guests can choose from a wide range of entertainment, which is especially fun for families with children and teenagers. Amusement arcades, snack bars, restaurants and activity centers vie for your attention – fortunately on a much smaller and friendlier scale than in Lloret de Mar.

Book a hotel in Blanes

Book a hotel, B&B, or apartment in Blanes. You won’t regret it!

This article was first published in August, 2018. It is kept up-to-date by the VisitBlanes team. 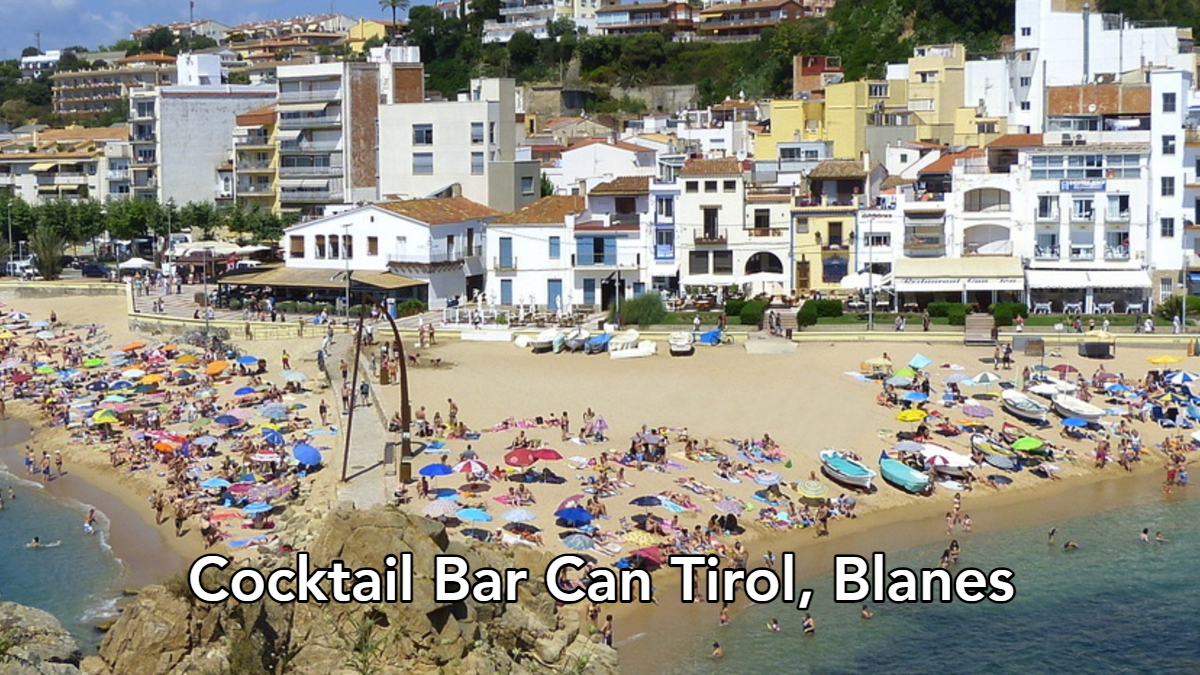 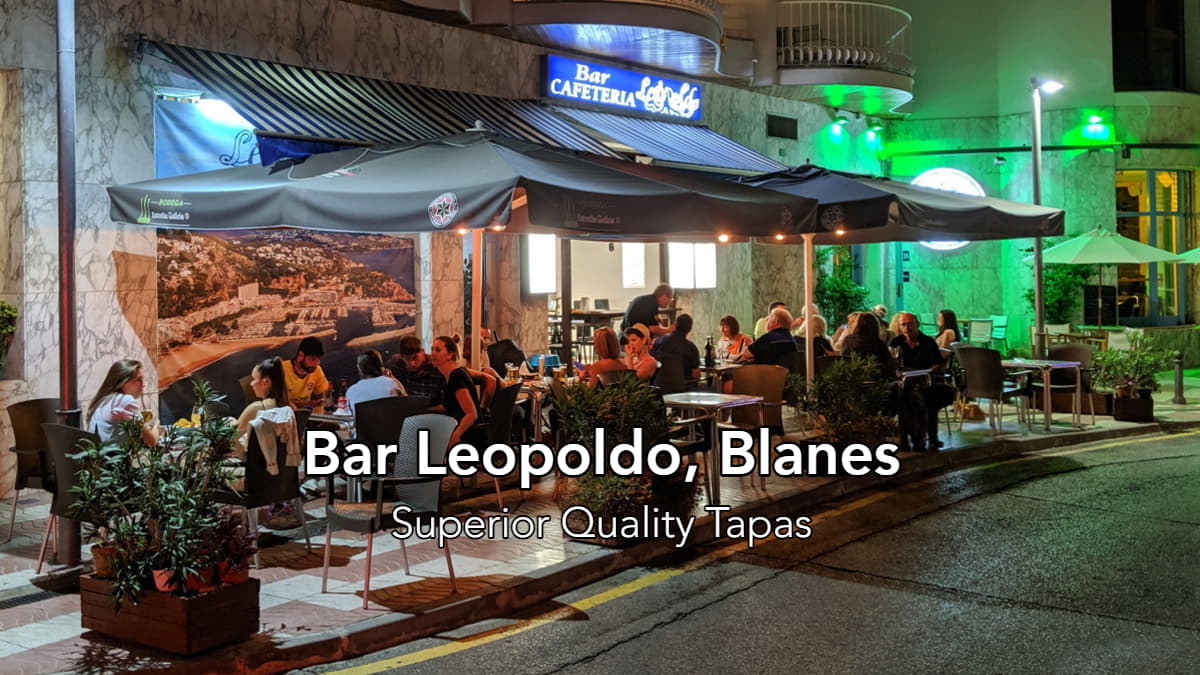 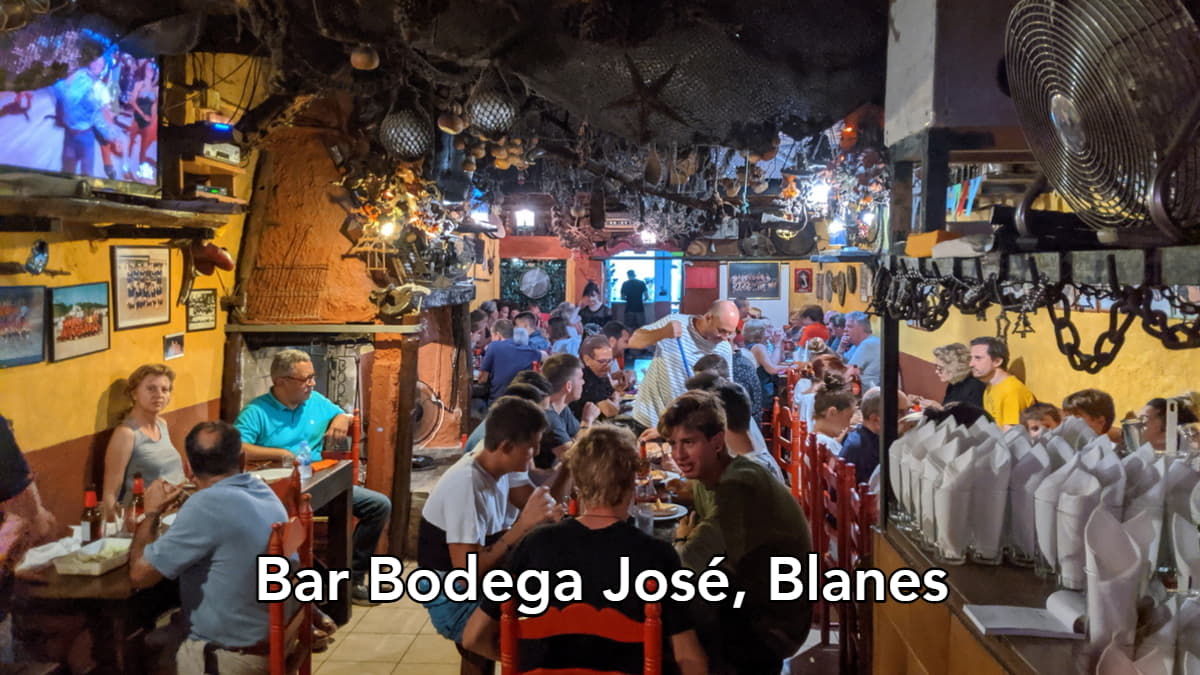 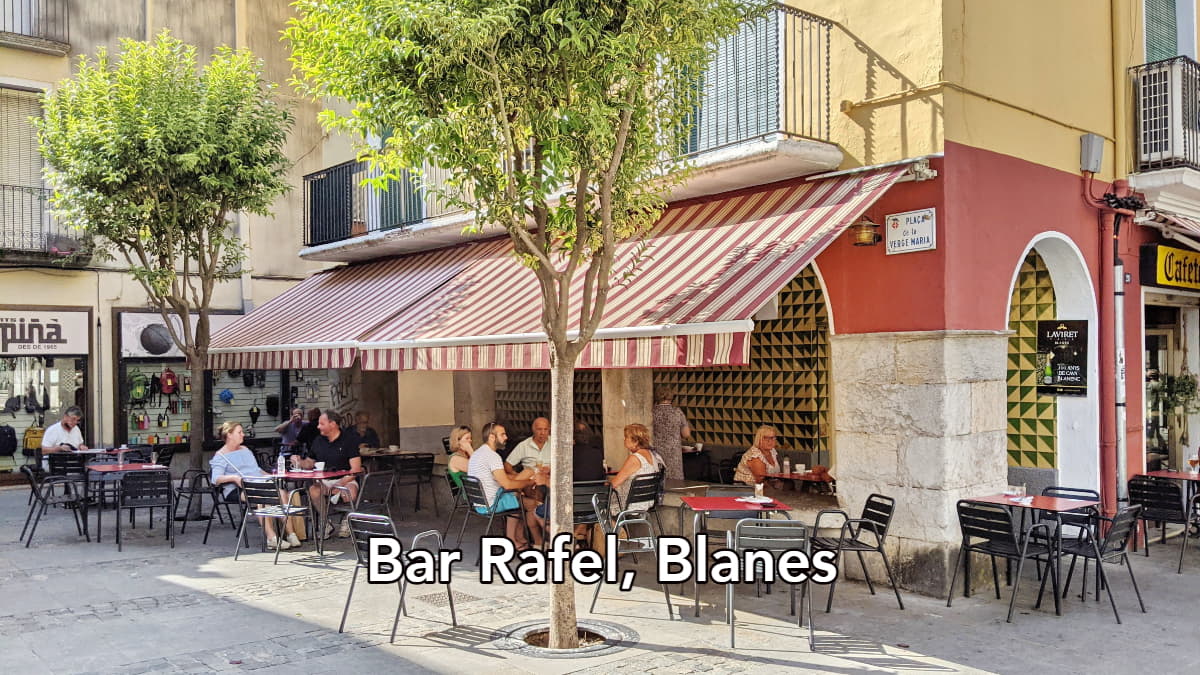 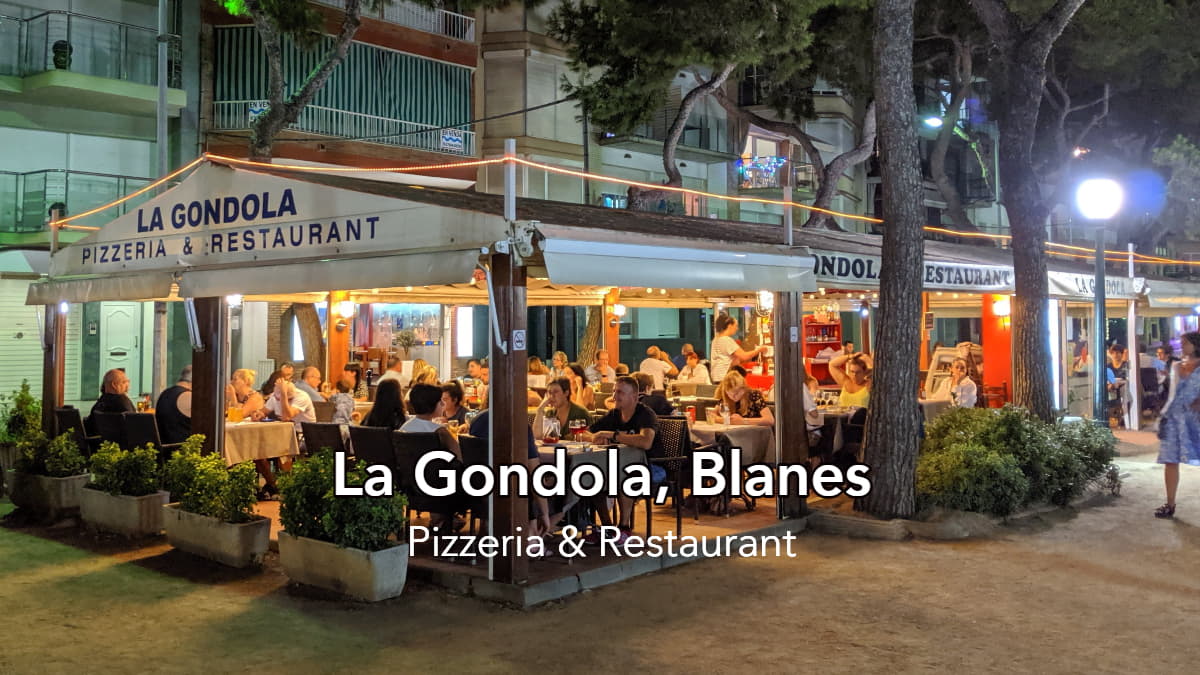 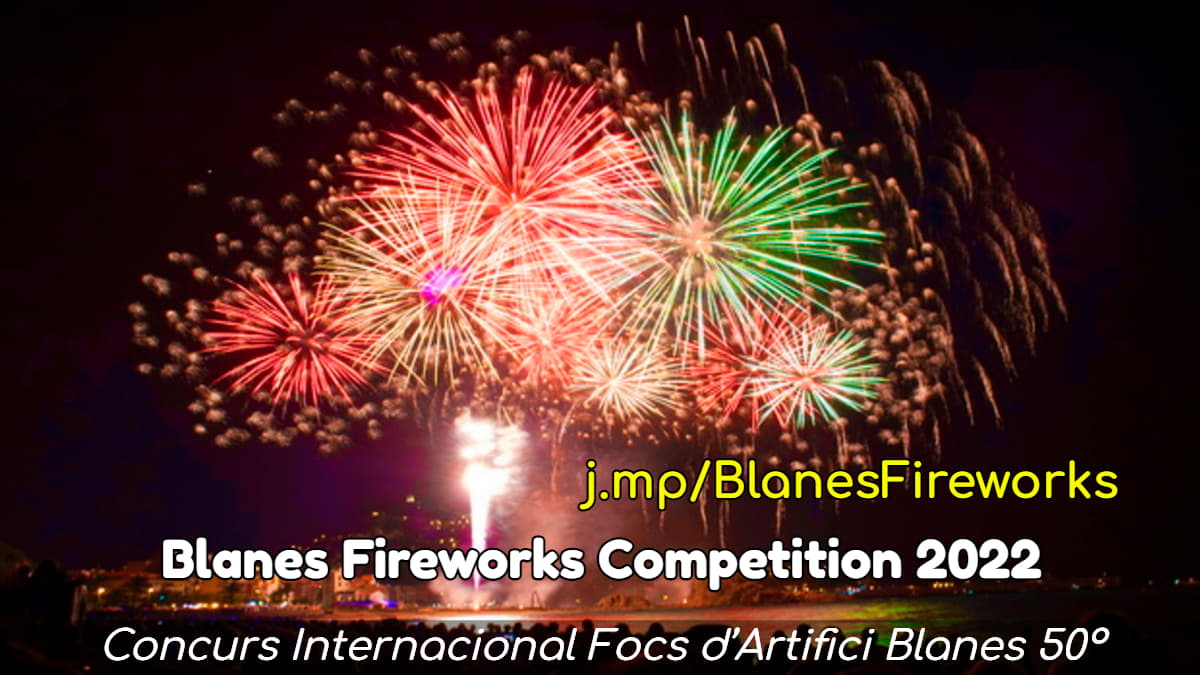 Thank you for using our Visit Blanes tourist guide. We trust you will have wonderful holidays! See the Costa Brava, the Wild Coast, from the water:
Roundtrip Ferry from Blanes to Tossa de Mar
This post was last updated: Aug. 17, 2022