Therea was a rare red flag warning at the Blanes beach of St. Francesc last Monday because a number stingrays had been spotted in the water. 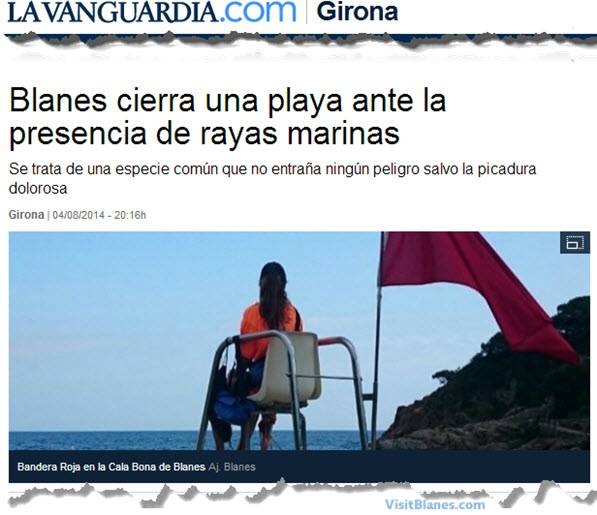 They do not normally attack people, but when a bather accidentally steps on a stingray the fish defends itself with its tail, which includes one or more barbed stingers — causing extremely painful injuries.

With their flattened appearance the fish are difficult to spot even in shallow waters. 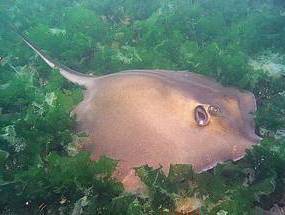 A total of five stingrays were observed in the water. The fish, measuring 40 centimeters wide by 40 centimeters long and with a 20 centimeters-long tail, are smaller than varieties found elsewhere, says the Institute of Marine Sciences.

Though extremely painful, stings from this particular variety not poisonous, say biologists with the Institute.

Still, lifeguards — employed by the departamento de Protección Civil — will prohibited people from going into the water when the fish are spotted.

The red flag warning stayed in effect until the next morning.

If you’re concerned about stingrays, which are hardly ever seen close to the coast of Blanes, shuffle rather than walk in the water. Alternatively toss a few rocks in the water to scare them away. As always, when going into the sea it may also be advisable to wear wet-shoes.

Stingray bites should be treated by a doctor, who will usually give a tetanus shot. If possible, until then keep the wounded area in warm water and apply a pressure bandage if the wound is bleeding.

‘Hidden’ behind the hill of St. Joan — quite a distance away from Blanes’ tourist district — Cala Bona is loved for its beautiful setting.

The cove has a wide, sandy beach surrounded by rocks. The view of the Mediterranean sea — with Lloret de Mar in the distance — is fantastic.

The clean sand gently slopes into the shallow, warm water — making it perfect for young children.

Where the water does get deeper swimming is a true joy. You’ll also see many scuba divers, attracted by the beautiful underwater scenery.

There’s a sandwich eatery staffed by friendly locals, and a great restaurant.

Public toilets are available as well.

It takes a bit of effort to reach this beach. If you are staying in the tourist district or in the old town center of Blanes, the easiest way to get here is by taking the tourist bus up to the Marimurtra Botanical Garden. Then continue on foot for about 10 minutes, and just in front of the mission chapel make your way down the beach.

Mind you, you’ve got make your way back up the hill and back to town as well. Instead of walking back, many people instead opt to call a taxi (sometimes the folks at the snack bar will do so for you), and take a ride back to the hotel or apartment.

We think it’s well worth is, because the beach at St. Francesc is among the best and most picturesque the Costa Brava has to offer.

More about the Beaches of Blanes

Thank you for using our Visit Blanes tourist guide. We trust you will have wonderful holidays!
This post was last updated: Dec. 18, 2015